After the exciting end to our previous day at the Fiesta de la Vendimia,  day 3 had a surprising start.  As followers of Montilla Digital, an online local news website, we noticed that there was a review of the previous nights competition.  So over breakfast we read it and there we were featured in their article covering the Venenciador competition.  What an honour!  The feature can be read here.

To set the scene for the day, back in March, with Andrew from undertheflor.com , in Madrid we went to La Malaje. Read about our visit here. It was here that we first discovered the wines of Bodegas Luque in Doña Mencía-  a new Montilla-Moriles bodega to us.

So after breakfast we headed east for our first  scheduled part of this trip, a tour of the aforementioned Bodegas Luque, organised by a good friend of ours.

The beauty of visiting a new bodega is you just don’t know what to expect and this visit was to be no exception.

The Bodega has over 4000 oak barrels held in cellars named the ”Sotano” (the basement), the Antigua Nave de Conos”, (Old Ship of Cones), the ”Molino”(the Mill) , “Tenis” (Tennis), and the “Avión” (Aeroplane).

They were named many years ago after what they they resembled or were previously used for.

The foundation bodega buildings were originally located in Las Higueras and moved to the current location on La Molinera street in the 1970’s. The facilities were then modernized and capacity increased due to demand.

Manolo was our guide and he enthusiastically showed us all of areas of the bodega.

The tinajas at Bodegas Luque

Discovering the origins behind the names of the wines we try is always interesting and this was to be no exception.

The signature “Fino el Pato” Duck Fino , was given it’s curious name back in the 1940’s. The sons of D. José Luque, the founder, used the excuse of going to play with the ducks to drink the Fino.

Their father noticed the wine levels dropping every time they went to play with the ducks.

They also returned really happy from these visits to play with the ducks, therefore that it seemed apt to call the wine “Fino el Pato”.

During our visit the latest version of the Fino El Pato Especial en Rama was being bottled, a wine we first tried back in March at La Malaje in Madrid.

Erik with our tour guide Manolo

At the end of the tour we were able to try the Fino el Pato Especial and the El Abuelo Amontillado with Manolo. We bought a bottle of each to bring back to Scotland to review in more detail.

After lunch in Lucena we headed back to Montilla.

When arranging this trip we committed to attending the Vin Arte dinner later in the week, at the castle on Saturday night.  Featuring the wines of Bodegas Robles paired with dishes from Taberna Bolero, we knew that it would be an excellent evening. Taberna Bolero is one of our go to places to eat in Montilla and Bodegas Robes produce a stunning range of award winning and innovative organic wines.

As we needed to collect and pay for our tickets we took a walk down  to see Carlos the proprietor of Taberna Bolero.

What was then to happen was so serendipitous. Two ladies were heading into the Taberna in front of us and we recognized one of them.

It was the one and only Rafy Mármol from Casa Rural Finca Buytrón who we had met in May last year.

Needless to say a visit to pay for 2 dinner tickets ended up with an evening enjoying some amazing wines and  food but best of all catching up with old friends and making new ones. 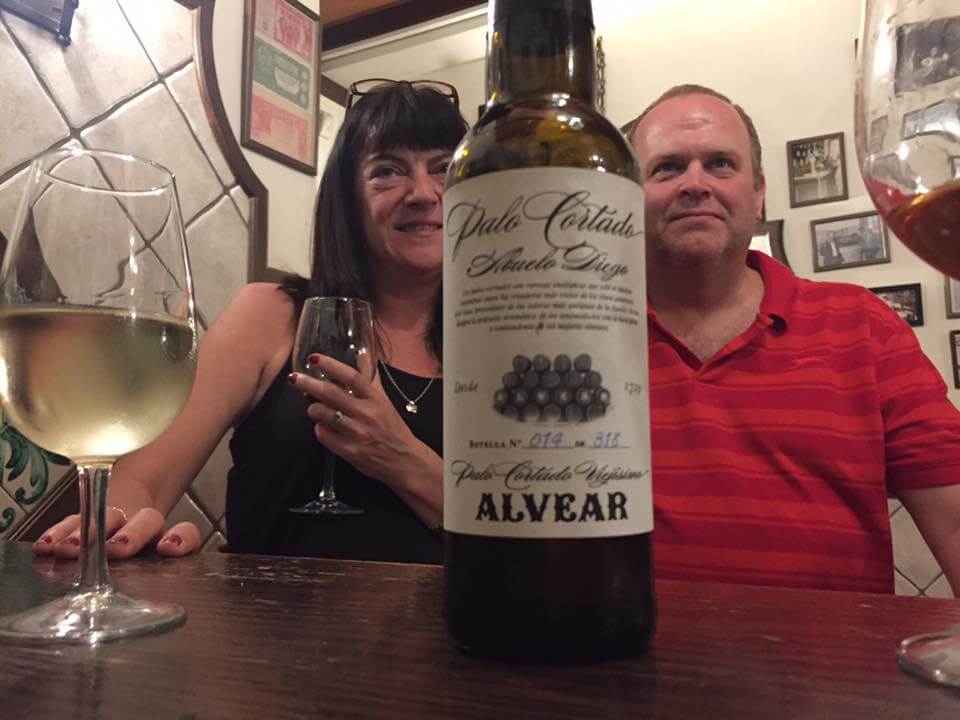 Some of the wines we tried were truly amazing especially those wines from the taberna’s own casks and the limited edition Palo Cortado in the photo above from Bodegas Alvear, one of only 318 half bottles.

So yet another day of fine wine, chance encounters and excellent food.  There were still seven more days to come and goodness we were looking forward to them.